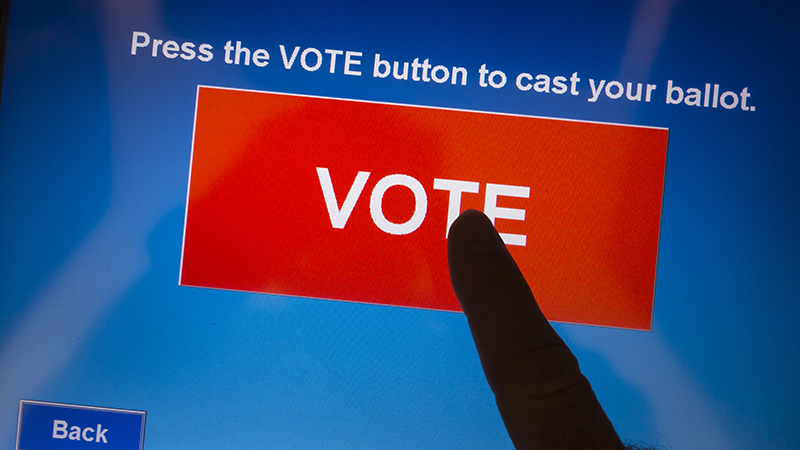 The vast majority of tech-savvy voters heading to the polls today across Connecticut, Delaware, Maryland, Pennsylvania, and Rhode Island, are in for the shock of their lives: paper ballots.

They’re not the kind of paper ballot that you fold in half and slip through a hole in a ballot box, but a semi-high-tech optical scan ballot that is first marked by the voter and then processed by the optical scanner to tabulate the votes. All of the states holding primaries Tuesday, with the exception of Delaware, use paper ballots or a combination of paper and electronic systems.

<a href=”https://www.meritalk.com/wp-content/uploads/2016/04/woman-voting-scan-ballot.jpg” rel=”attachment wp-att-10689″><img class=”alignleft size-medium wp-image-10689″ src=”https://www.meritalk.com/wp-content/uploads/2016/04/woman-voting-scan-ballot-200×300.jpg” alt=”woman voting scan ballot” width=”200″ height=”300″ /></a>This is the new reality facing elections in the United States. The most connected country in the world has connected so many devices that securing all of them—including the once highly touted electronic voting machine—is a near impossibility. Add to the security concerns real questions about transparency, reliability, and the ability to conduct fair and accurate recounts, and you have the makings for a mass move back to paper ballots.

“Based on what I’m seeing and how slowly technology evolves in the elections world, we will still be on paper over the next five to 10 years,” said Matthew Davis, the chief information officer for the Virginia Department of Elections. Davis <a href=”https://www.meritalk.com/video-interview-matthew-davis-cio-virginia-department-of-elections/” target=”_blank”>spoke to MeriTalk at the 2016 Akamai Government Forum</a> in Washington, D.C.

Virginia knows a thing or two about electronic voting system security. Virginia’s board of elections last year decommissioned 3,000 touch-screen voting machines after officials learned of significant security vulnerabilities involving wireless access that would have allowed hackers to access vote tallies. The Virginia General Assembly voted in 2007 to ban new purchases of electronic voting systems and to require the replacement of all touch-screen systems in the commonwealth by 2020.

“We have roughly 50 of the 133 localities still using touch-screen systems,” Davis said. “Everybody else is on a paper ballot. You vote on a digital or optical scan ballot—the old Scantron type of technology. That ballot is fed into a ballot tabulation machine at the polling place.” Ballot tabulation machines are not networked for security reasons, he said.

“At the end of the night when the polls close, those machines have tapes that print off and there’s a whole series of checks that make sure the number of ballots cast is the same as the number of ballots issued,” he said. “At most localities, the poll chief will pick up a phone and call the local office with the vote totals. And then all of the paperwork will be transported to the local office for official record keeping.”

There was a time when paper ballots were as vilified as insecure electronic voting systems. The hanging chads of the 2000 presidential election in Florida gave rise to a nationwide call to modernize voting systems. The pendulum quickly swung in favor of electronic systems that would eliminate any doubt as to the intent of the voter. But that pendulum has swung back yet again, now in favor of ensuring there is a paper trail to verify the vote, said Davis.

“In a recount situation, having that verifiable ability to actually run the ballots through the machine again and get a new tally is really critical,” Davis said. “And in a touch-screen system…the only thing to do [in the event of a recount] was to go back and read the tape that printed off. So the only thing you were going to catch in a recount would be a transcription error or a missed machine. Whereas in a paper ballot location, there are physical ballots that can be reviewed or audited.”

“With election night results reporting, we’re dealing with individuals who have been working a 16-plus hour day, and other individuals at the election administration level who have been working 16-, 18-, or 20-hour days for weeks on end. So mistakes do happen as we start transcribing results over telephone calls and the various methods the 133 localities use to get that data back to our system,” Davis said.

Although there are processes in place designed to catch those errors early in the election and allow officials to take action before they spiral out of control, the process remains manual and labor-intensive by design.

“We’ve all seen the images of two guys sitting at a table looking [at a paper ballot] and saying, ‘did the person intend to vote for this candidate or not?’ ” said Davis, referring to the 2000 election in Florida. “With a paper ballot, you can have that argument. Without it, you can’t.”