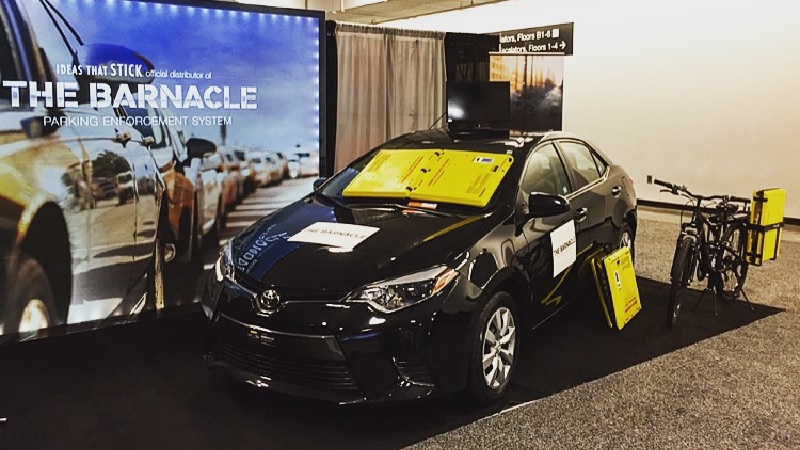 The Barnacle, a parking enforcement tool launched this summer, is latching onto cars with multiple parking violations in Fort Lauderdale, Fla., and Allentown, Pa.

The yellow device fits onto a car’s windshield using suction cups that apply 750 pounds of force, blocking the driver’s view. To release the Barnacle, the driver must call the number displayed on the device, pay the fine, type in the release code, and return the Barnacle to a drop-off location within 24 hours.

The Barnacle has a drill-resistant shield and a security feature that prevents tampering with the suction cups.

“We could get used to calling ourselves the official toy of law enforcement,” The Barnacle tweeted.

We could get used to calling ourselves the official toy of law enforcement. Check us out in action on @MSNAutos https://t.co/iqTRnsB3tv

Since the cities began using the Barnacle about a month ago, Allentown has deployed the device 25 times and Fort Lauderdale has used the device 15 times. The Barnacle is expected to go into full production in New Jersey in the next three months.

The company recommends not pulling an “Ace Ventura” by attempting to drive by looking out the window while the Barnacle is obstructing the view through the windshield.

The Barnacle is safer for law enforcement than a traditional boot, which is placed behind a car wheel to prevent the vehicle from moving, because police officers won’t have to bend over or expose their backs to traffic when deploying a Barnacle. The Barnacle also deploys in less than 90 seconds.

The Barnacle is stackable, less than 20 pounds, exudes less carbon emissions, towable when deployed, creates no wheel damage, and has high visibility, which deters other drivers, according to the company.