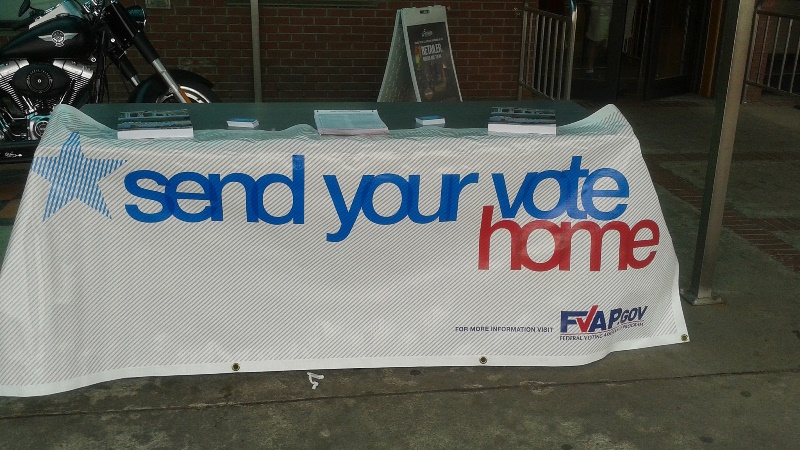 Military and overseas citizens face extra challenges when voting, and the threat of ballot hacking shouldn’t be one of them.

“The levels of protection for hacking…is certainly of concern to us and something we take very serious,” said Louisiana Secretary of State Tom Schedler. “The rhetoric around the potential hacking of the election this November is the cause of a lot of angst to all of us.”

“Local election officials are professionals who go to great lengths in their ballot handling procedures to ensure their vote, and personal information, are kept private,” Roddy said.

Voting machines located in the United States aren’t connected to the Internet and contain authentication and encryption software. Also, each state chooses a different machine type that meets the needs of its population. Overseas voters don’t have these protections.

Jack Cobb, laboratory director of Pro V&V Laboratory, tests voting machines to ensure they can’t be hacked. In the United States, hacking enough voting machines to affect the outcome of the election would take a massive amount of expertise and manpower, according to Cobb.

“I’m not saying that it’s not possible, but practical–it might be better to just go vote than to try to do it,” Cobb said.

Overseas voters and voters with disabilities are the only populations that have access to voting systems that connect to the Internet. Disallowing email ballot return options for those populations would disenfranchise those voters, according to Cobb.

“When you’re calling home your first question shouldn’t be how do I get the ballot,” West Virginia Secretary of State Natalie Tennant said about active duty military members. “It should be how was the game? How was the dance competition?”

Military families are a highly mobile population, they face restrictions that require the United States to send them ballots at least 45 days before the election, and they must navigate complex absentee ballot rules that are different in each state, according to Roddy.

“Given this complexity, FVAP has made significant strides with standardizing and adopting plain language in its publications to reconcile Federal law with state law as part of its effort to make the absentee voting process more welcoming,” Roddy said. “While we continue to send monthly emails to all military members, we’ve expanded traditional and digital earned and paid media campaigns. We’ve created new education materials, videos, tool kits, and digital platforms to support these initiatives, too.”

Overseas voters still have the option of returning their ballots by traditional mail, although the delivery is slower than an email would be. FVAP works with the Military Postal Service Agency and the U.S. Postal Service to communicate trends and ensure the successful delivery of ballots.

FVAP is also trying to increase the amount of electronic communication between election officials and overseas voters.

“We’re asking election officials to put themselves into the minds of the military members who may be sending that ballot from Afghanistan or Iraq,” said Matt Boehmer, director of FVAP. “A simple email communication saying ‘we’ve received your ballot’ is something that we think would be really successful.”