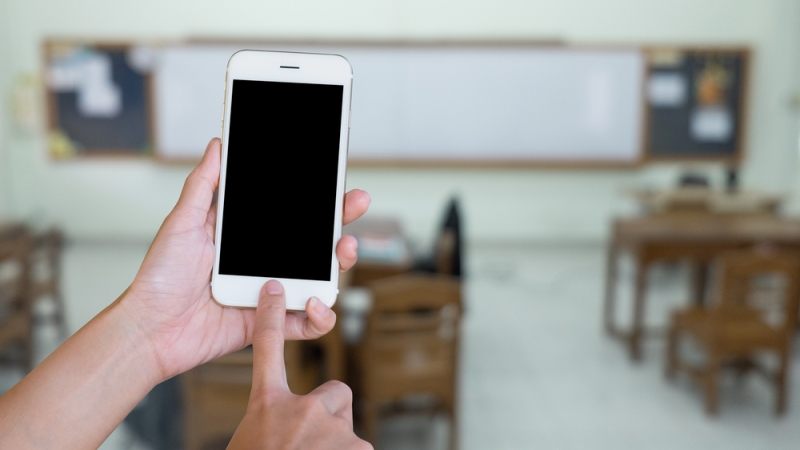 “An active shooter at a school is one of the most horrifying realities that modern society faces,” he said. “Many lives are at risk in a contained, defenseless space. An active shooter is unpredictable, and the situation can advance quickly.”

Unlike the other technologies on the market, COPsync911, the company’s education sector solution, does not use sensors. Instead, it uses teachers and school staff. COPsync911 is a real-time threat-alert service that uses school staff to provide first responders with critical information.

“Since the school shooting at Sandy Hook, a gun has been fired on school grounds nearly once a week,” Woessner said. “In the first crucial minutes of a deadly threat incident on a school campus, before the police can arrive, teachers are the first responders.”

When an active or dangerous situation begins, teachers activate an alert either through a desktop or mobile app. After initiating an alert, users have 15 seconds to send the alert or cancel. If there is no activity in 15 seconds, an alert is sent.

Once the alert goes out, communication between the COPsync network and police begins immediately. After teachers or school staff activate an alert, police begin responding and gathering needed information. Throughout the incident, teachers can update police and the 911 call center with real-time information, including the assailant’s movements, injuries, and locations.

The COPsync911 solution is part of a larger CopSync network.

“The COPsync Network incorporates a suite of software modules for patrol officers enabling them to communicate and share information in real time across jurisdictional boundaries from a mobile computing device,” explained Woessner.

COPsync911 is currently present in approximately 1,050 schools. Unlike sensor-based solutions, COPsync911 can be used to alert police before a gunshot is ever fired.

“The COPsync911 threat-alert system is activated by school faculty and staff when a threatening incident arises, which allows the employees to send an immediate silent alert to all other employees, the local law enforcement dispatch center, closest patrol cars and on-duty law enforcement officers, even if they are away from their patrol car,” he said. “The school staff, responding officers and the local dispatcher communicate about the incident as it unfolds via a ‘Crisis Communications Portal.’ ”

Unlike other technologies in this space, COPsync911 has been deployed in a real-life situation.

“A school secretary received a call from a community member advising that her son threatened to come to the elementary school and take her kids from the school,” Woessner recounted. “The caller also stated that he was armed with a gun. The school secretary launched the alert. In less than two minutes, officers were at the school and lockdown procedures had been initiated. The school remained on limited lockdown for the rest of the day until the suspect was apprehended.”

While the sensor-based products require little technological infrastructure, COPsync911 needs more technology to operate–luckily it’s technology found in nearly every school. Woessner said that for the desktop app computers need to run Windows and have 2 gigabytes of RAM, as well as a live Internet connection. The mobile app supports Safari iOs and Android.

When asked about COPsync911’s future, Woessner is extremely positive.

“The future looks bright,” he said. “We have the hope of connecting hundreds of thousands of schools, colleges and universities, hospitals and energy centers to the COPsync911 threat-alert system as well as the majority of the 18,000 law enforcement agencies to the COPsync Network.”

Also in this Series:

Patented Multisensor Technology Can Save Lives in School Shooting